In the early 1980’s Abbotsford was one of the fastest growing cities in Canada. The leaders of a few established Mennonite Brethren churches in Abbotsford proposed the planting of a new church in the north west region of the city where much of the growth was happening. All of those new people coming to town needed a church! In March of 1980, it was agreed that several families from Central Heights, Bakerview and South Abbotsford MB would form the charter members of Northview Community Church.

Northview had its very first service on September 7, 1980 at the newly built MEI High School auditorium on Downes Road. Rapid growth within the congregation led the leaders to seek out a more permanent meeting place. A large, ten-acre plot of land became available just down the road. It was way bigger than they needed. In faith, they moved forward and believed that God had a plan even if it seemed too big to grasp. In November of 1987 construction began.

One year later the new building was opened. Around the same time, Pastor Vern Heidebrecht was hired as the lead pastor. Through his leadership and faithful biblical preaching, Northview continued to grow and have influence within the city of Abbotsord. 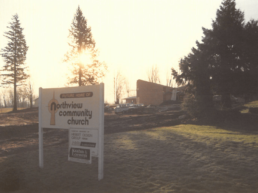 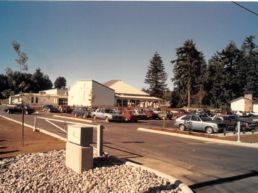 Jeff Bucknam was named the Lead Pastor of Northview in 2008. The following 12 years were ones of renewed vision and a greater calling to church planting and leadership development. In 2015 it was decided that Northview would take over leadership of Northside Community Church in Mission. This became the first of several campuses within the Northview family of churches.

In 2018, the East Abbotsford Campus was launched and quickly became a thriving community off over 500 people meeting at Abbotsford Christian School. In 2020, we launched the Central Abbotsford Campus that meets on Saturday nights at the Mill Lake Church. In 2021, Real Life Community Church in Surrey became an official campus of Northview.

During this time period we also partnered with several other churches to plant Tri-City Church in Port Coquitlam and Praxis Church in Kelowna.

In addition to official campuses and church plants, Northview has been heavily invested in training leaders for ministry. Through our work in the Northview Leadership Institute, we have seen many of our students go into full-time pastoral ministry in churches across Canada.

Northview wants to see a healthy local church within reach of every single Canadian.

And yet, the Great Commission that Jesus gave to his disciples was to make more disciples to the ends of the earth. That is why in addition to supporting dozens of missionaries across the globe, we are working with church planting ministries in several focus regions around  the world. We are involved in pastor training, resourcing, and funding church plants in some of the hardest to reach places.

In 2021, Mark Burch, was affirmed as the new Lead Pastor of Northview. Jeff Bucknam was blessed by the congregation as he followed God’s call to leave Northview to pastor Harvest Bible Chapel in Chicago.

The history of Northview is still being written. We’d love to have you be a part of writing it with us.