“The drinking started during my first marriage. It was slow at first. We had four children; life was busy, and I just wanted to take the edge off. My marriage fell apart and I got remarried a little while later.  My second wife and I spent our time and our money just enjoying life. But it didn’t take long for the fun to wear off and that marriage fell apart too.

I’d take my kids to church at Christmas but that was about it. And yet somehow, something must have gotten through to them. My son Jesse started going to Northview as a young adult and he didn’t even tell me. I think he knew I was too preoccupied with my social life and I had no interest in church. By God’s grace, he found hope in Jesus.

But Jesse’s old life followed him into his new one. He tried so hard to shake it. It wasn’t alcohol that took the edge off for him, it was cocaine. Every few months the pressures of life would build and he’d fall back into his old temptation.

Jesse died tragically in 2013 at the age of 33. Earlier that day he asked if we could spend some time together. I told him I was busy. He wanted to talk about something important but I wasn’t in the mood. He died later that night. It sent me further down the dark path I was already on. What would have happened if I hadn’t shrugged him off?

Alcohol became my best friend after that. I knew my life needed to change and that God was the answer, but I resisted. I chased pleasure even more. Wine, women, cars, race horses, you name it. Anything to mask the pain.

A year later my sister’s family was visiting from out of town and they wanted to take me to church. I suggested Northview because that’s where Jesse went before he died. By “coincidence” Pastor Ezra preached that morning. He had officiated Jesse’s funeral. I was undone. I wanted to leave right away but my brother-in-law said that we needed to find Pastor Ezra. After the service Ezra was talking with people in the foyer. He recognized me and came to me before I could even approach him. He said, “Let me show you where Jesse, your son, used to sit every Sunday”.

That was the beginning of my turnaround.” 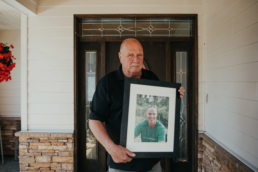 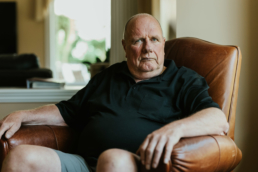 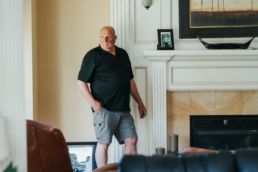 “I started attending the Mission campus where Ezra preached. God was speaking to my heart, but I still struggled. My daily life was ungodly and I continued drinking too much. The years went by and I ruined another relationship. The wine went from a glass or two a day to a bottle or two. My friends and family were praying for me the whole time. God was giving me all these chances but I was fighting it. Finally he put me in the hospital to get my attention.

On May 28, 2021, after another night of drinking, I collapsed in my bedroom and broke my hip. For several hours I dragged myself across the floor to reach my phone in the kitchen. On my way home from the hospital a few days later I looked out the car window and knew I had to change my life. This time it had to stick.

A few months later I called Northview hoping to talk with Pastor Ezra. He wasn’t available so they passed me on to this young guy named Fredy. I thought, Okay, fine, I can talk with this fella. I wasn’t’ sure we’d have much to talk about. We began to meet regularly for lunch and talk about the scriptures, faith, redemption, grace, and the hope we have in Jesus. I started to understand the Bible in ways I never had before. He had so much passion for Jesus. He helped me finally understand that God already loved me and that I didn’t need to earn it. I gave my life to Jesus and Fredy said it was time to get baptized.

My brother flew up from California for my baptism. He had been waiting for that day for the past 25 years. Business associates from my previous life were there. My neighbours were there. My grandkids were there. I looked around and realized just how much God loved me. All along I had all of these people in my life who were faithfully praying for me. When I came out of the water, they were there, waiting. One by one, they came to the tank and hugged me. They didn’t even wait for me to get out like everybody else.” 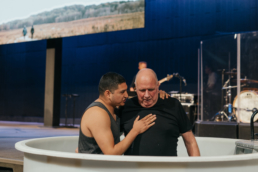 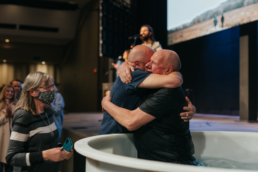 A friend of mine gave me a daily devotional the day I got baptized. I read it every morning. On May 27 of this year, the day before the anniversary of breaking my hip, the devotional was about how Jacob wrestled with an angel and the angel broke his hip. That’s pretty cool that God would put that devotional in my hands on that particular day. I guess when God really needs to get your attention he’s going to break your hip.

I still hang out with some of my old friends. They ask me why I don’t drink anymore and I love telling them my story. My life looks totally different now. I used to look forward to that first glass of wine. I always craved that first buzz. But it never stopped at one. I haven’t had a drop of alcohol since the day I left the hospital. The guilt and shame I used to have has been replaced by peace. I have peace in my soul now. I don’t need that buzz. The peace is better than any buzz.

I finally realize now that Jesse didn’t die for no good reason. Through his death, he gave his father new life. I know I’ll see him again. But until then, I still have some work to do here. God’s not done with me yet.” 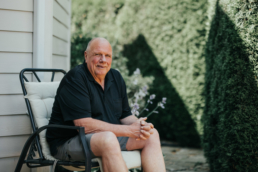 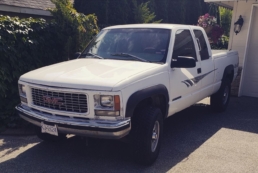 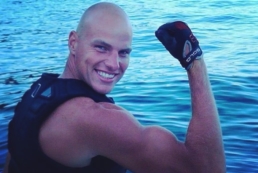